How do scientists measure earthquakes? 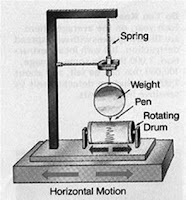 Earthquakes around the world are monitored by seismologists (scientists who study earthquakes). They use Instruments called seismometers to register earthquake vibrations. Many seismometers are placed in remote areas and their Information is transmitted to central observation stations. Most modern seismometers are electronic. They monitor vibrations digitally (as numbers). Their information is then turned into a visual record of the shock waves, called a seismogram.
Simple, non-electronic seismometers produce a seismogram using a recording device, such as a pen, attached to a heavy weight. The weight and pen are suspended from a frame. A powered, rotating cylinder is also attached to the frame, which is secured to the ground. As the Earth shakes, the weight and pen remain still, but record the movement as the frame and the cylinder are shaken.
To understand the way in which simple seismometers work, tie a small, heavy weight, such as a pocket-sized plastic bottle full of liquid, to one end of a 1 meter (40 in) length of string. Hold the string at the other end and lift the weight off the floor. If you move your hand rapidly backward and forward, the weight will remain almost stationary. During an earthquake the weight and pen of a seismometer act in this way.
Read more »
Posted by shenoy joseph at 7:13 AM

Email ThisBlogThis!Share to TwitterShare to FacebookShare to Pinterest
Labels: science